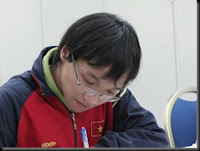 Kuala Lumpur Open 2009
Grandmaster Nguyen Ngoc Truong Son from Vietnam lived up to his top billing by winning the KL Open 2009 with an impressive 7.5 points from 9 games and RM 10,000.
In second place, half a point behind on 7 points, was Indonesian Grandmaster Susanto Megaranto whose victory over Grandmaster Dao Tien Hai of Vietnam to earn RM 5,000 almost made up for two disasters in earlier rounds against less fancied opponents while Uzbekistan Grandmaster Saidali Iuldachev proved be a comeback kid with a strong finish to score 6.5 points for sole third place and RM 3,000.
Sharing 4th to 8th places and RM 1,000 were Dao, Grandmaster Marat Dzhumaev and International Master Tahir Vakhidov of Uzbekistan, Candidate Master Nguyen Hoang Nam from Vietnam, and International Master Richard Bitoon from the Philippines.
But perhaps the happiest were Nguyen Hoang Nam and Candidate Master Farid Firman Shah from Indonesia earned their first International Master title norms.
Of the locals, Edward Lee was the best performer with 5 points with Wing Jianwen, Najib Abdul Wahab, and Mohamed Abdul Haq a point behind with 4/9.
With 80+ participants from 11 countries (including 6 Grandmasters and 7 International Masters from a total of 27 titled players), the media friendly KL Open (which has perhaps set new standards for organisational excellence in the locally) can be considered to be a big success!
KL Young Talent Teams
As expected, Indonesia proved a convincing winner of the KL Young Talent Team Challenge with 38.5 points from a possible 54 with Singapore edging PCU Asia for second place.
Individual standouts were Luftu Ali (Indonesia), Joel Chan (Singapore), and Aziz Farhan (KLCA) in the under 14 section and Mohammad Firmansyah and Novendra Priasmoro (Indonesia) and Ryan Ow (PCU Asia).
The KL Open & Young Talent Team Championship 2009 was organised by the Kuala Lumpur Chess Association with sponsorship from the Malaysian Intellect Development Foundation and Masterskill University College of Health Sciences.
Posted by Unknown at 10:00 Links to this post 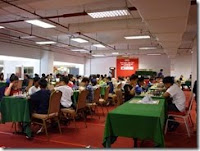 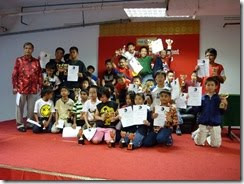 With a total of 129 young energetic kids able to play games at at rate of 45 minutes each per round (and over two days), the tournament was a very nice success indeed (and there were even participants from outstation as far as Penang!).

Trophies and cash prizes totally RM 1,350 were given away by KLCA Hon. Secretary Dato' Prof. Dr. Proom Promwichit and of course the ever available MCF Deputy President Ibrahim Bakar.

The winners also uniformly expressed their enthusiasm and willingness to participate in the KL Young Talent Development Program and a weekend is being planned to kick off the program in September.
Posted by Unknown at 10:00 Links to this post

The Kuala Lumpur Chess Association (KLCA) is pleased to be able to announce the 2nd KL Open Chess Championship 2009 for the Raja Nazrin Shah Challenge Trophy.

With sponsorship from the Malaysian Intellect Development Foundation (MIDF) and the Masterskill University College of Health Sciences, the KLCA will be organising this year’s KL Open Championship at Shah’s Village Hotel in Petaling Jaya from 3-9 September 2009.

The KL Open is KLCA’s flagship event, and this year’s championship seeks to build on the extraordinary success of last year’s inaugural event (see http://thefidetrainer.blogspot.com/2008/12/kl-open-begining-of-new-chapter-for.html). 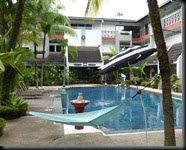 On the left are photos of the playing venue and official hotel which show clearly the resort village within the city theme.

It is expected that the KL Open will again somehow attract a disproportionate number of Grandmasters together with other internationally titled and highly rated players relative to the modest RM 40,000 prize fund, and big delegations are also expected from our enthusiastic neighbours Indonesia and Singapore as well as from Asia chess powerhouse India.

The KL Open 2009 has been approved by the Malaysian Chess Federation (MCF) and will be officially registered with FIDE as an international rated and title event.

For more details and to register, please email the Tournament Director peterlong@aol.asia.com
Posted by Unknown at 10:00 Links to this post

Our Inaugural KL International Open Championship is a Big Success 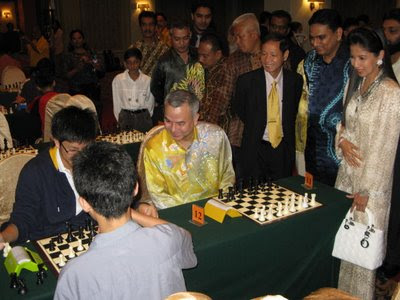 Filipov received RM10,000 for the win in the Open category at the six-day tournament, which attracted 140 participants from 11 countries.
China's Wang Rui who lost out on tie-break to finish second was still a happy winner as he completed the requirements for the International Master title with his fine performance.
Just half a point behind the winners, in third to sixth places respecively, were Grandmasters Nguyen Anh Dung (Vietnam), Susanto Megaranto (Indonesia), Magesh Chandra Panchanathan (India) and International Master Sadikin Irwanto (Indonesia).
Vietnam National Champion Nguyen Van Huy also achieved the International Master title with his excellent performance at the KL Open.
A total RM45,000 prize money in cash was awarded to winners by the Raja Muda of Perak, Raja Dr Nazrin Shah, himself a strong chessplayer in his university days, and his sister Raja Dato' Seri Azureen.
FIDE General Secretary and ASEAN Chess Confederation President Ignatius Leong and of course KLCA President Edmund Santhara spoke at the Closing and Prize Giving Ceremony.
While Mr Leong congratulated the KLCA President and Masterskill CEO on his excellent work both in Malaysia and at ASEAN level, Mr Santhara confirmed a long term sponsorship of the KL Open by Masterskill and reminded the audience that the KLCA, as a registered sports body under the Malaysian Sports Council, was committed to youth development and would be taking chess nationwoide in this context as a Nation Building CSR (corporate social responsibility) project.

International Master Manuel Aaron - an Asian and Indian chess legend - also graced the occasion as the tournament guest and gave a special simultaneous chess exhibition to a National Junior Selection.
The international level chess tournament was jointly organised by the Kuala Lumpur Chess Association and Malaysian Intellect Development Foundation with the support of the Junior Chamber International, a Worldwide Federation of Young Leaders and Entrepreneurs, managed by Intchess, and sponsored by Masterskill University College of Health Sciences.
Posted by Unknown at 10:00 Links to this post