It's Three Times in a Row for Tiviakov 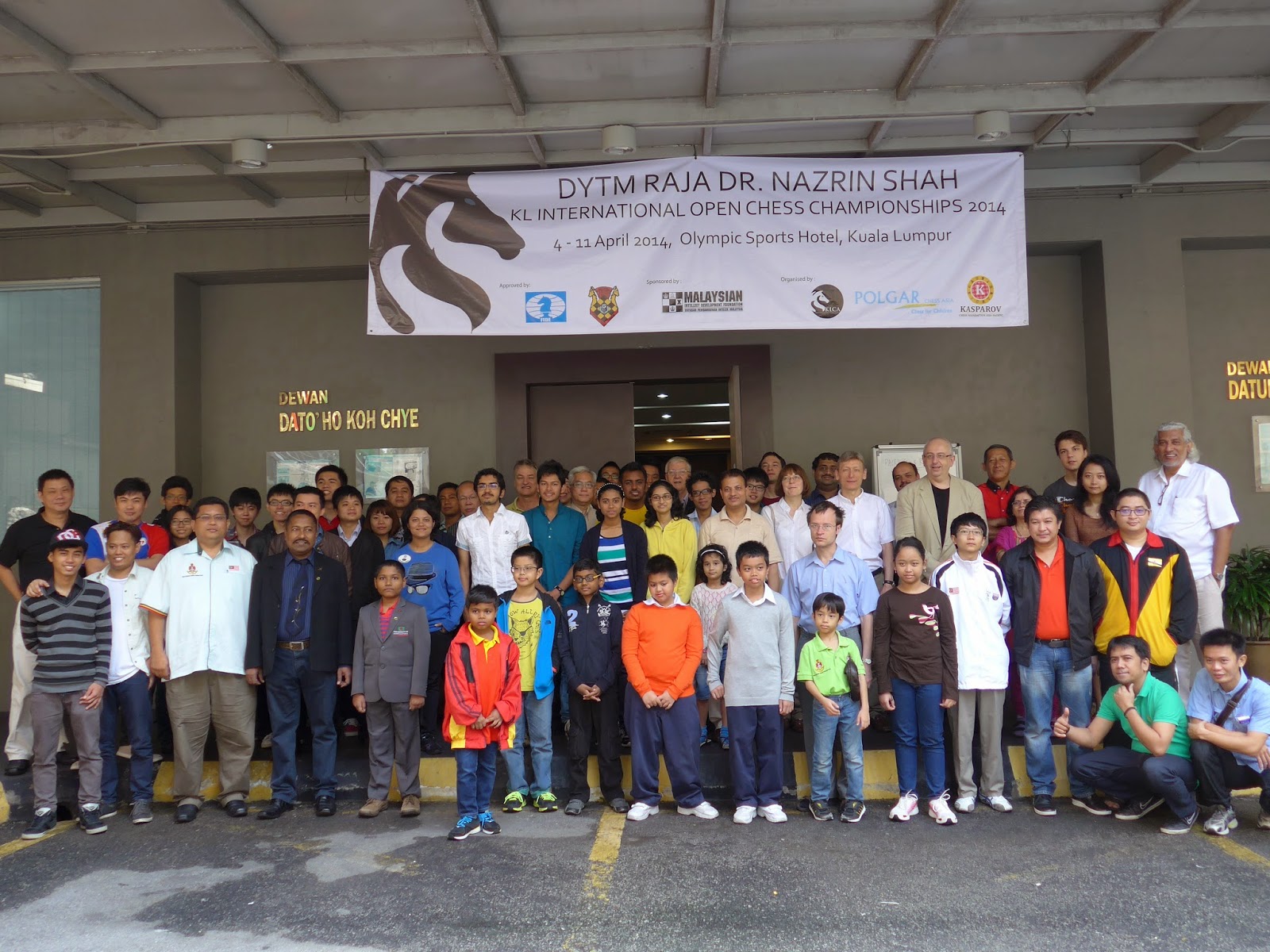 Sergei Tiviakov and Aravindh Chithambaram drew their game after three hours of play, a result that confirmed that Tiviakov would successfully defend his title and in doing so become a three time winner of the KL Open.

But for young Chithambaram, it was also a fantastic result as with the draw the 14 year old IM elect remained unbeaten and also achieved his second GM title norm.

So in first place is Tiviakov with 7/9, and in second to eighth places on 6.5/9 are Chithambaram, the also unbeaten M.K. Venkatesh, Nguyen Duc Hoa, Dzhumaev Marat, Haridas Pascua, Nguyen Anh Dung and Andika Pitra.

Posted by Peter Long at 14:30 Links to this post

It Promises to be an Exciting Last Round 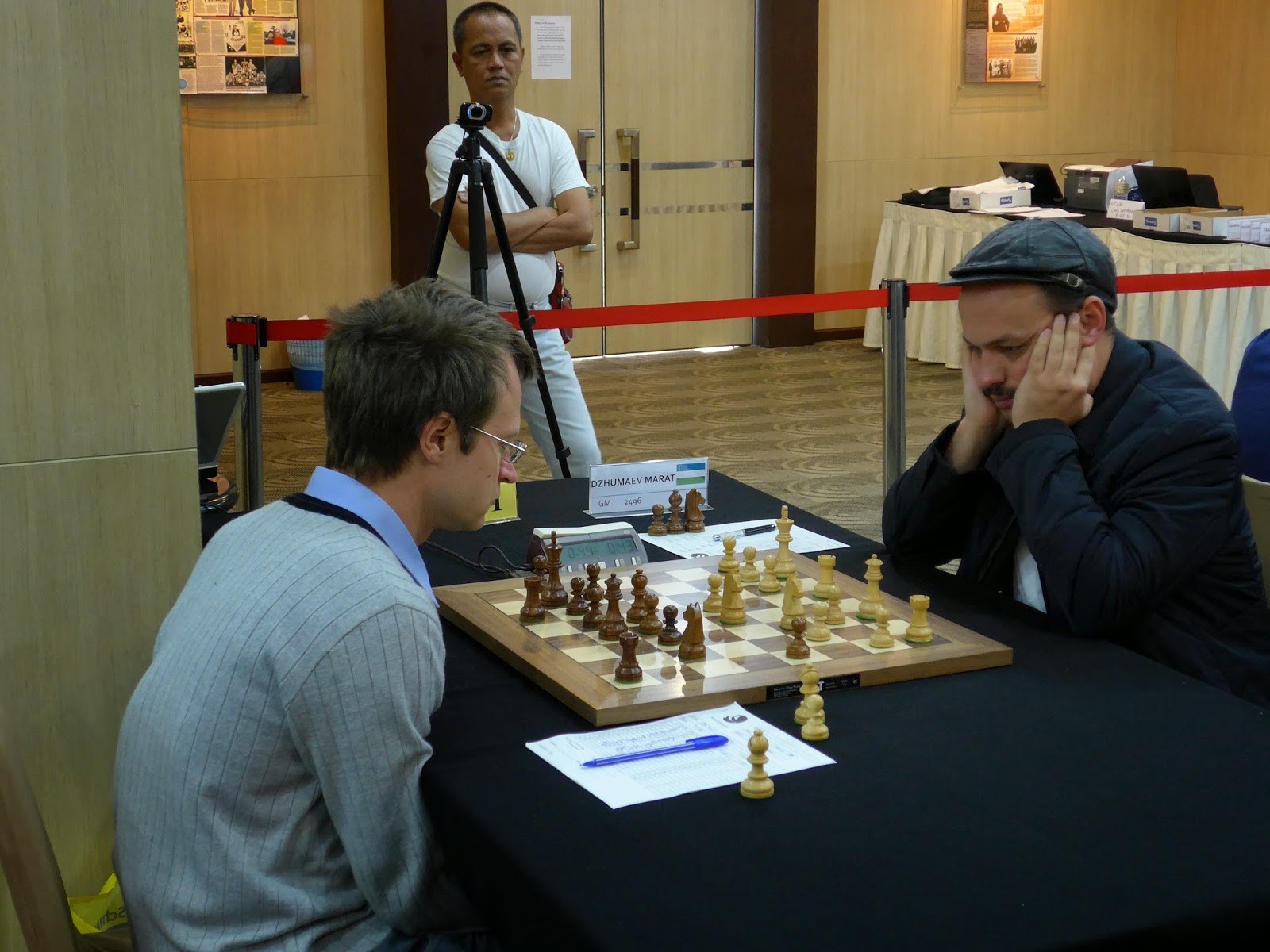 (Tiviakov against the always dangerous Marat, the game was double edged but still only a draw)

The advantage is clearly with Sergei Tiviakov who on 6.5/8 has a half point lead and his favourite White pieces in the last round.

But it may not be over yet as his opponent is the highly rated 14 year old FM Aravindh Chithambaram who last year shot into prominence by winning the Chennai GM Tournament held concurrently with the Anand-Carlsen Match and has continued to impress with every tournament.

Chithambaram is sharing second-third places with M.R. Venkatesh on 6/8.

The leading Malaysian is still IM Jimmy Liew with 5/5 and he faces fellow IM Moulthon Ly with hopes of further turning back the clock.
Posted by Peter Long at 14:19 Links to this post

Tiviakov leads by one with two to go 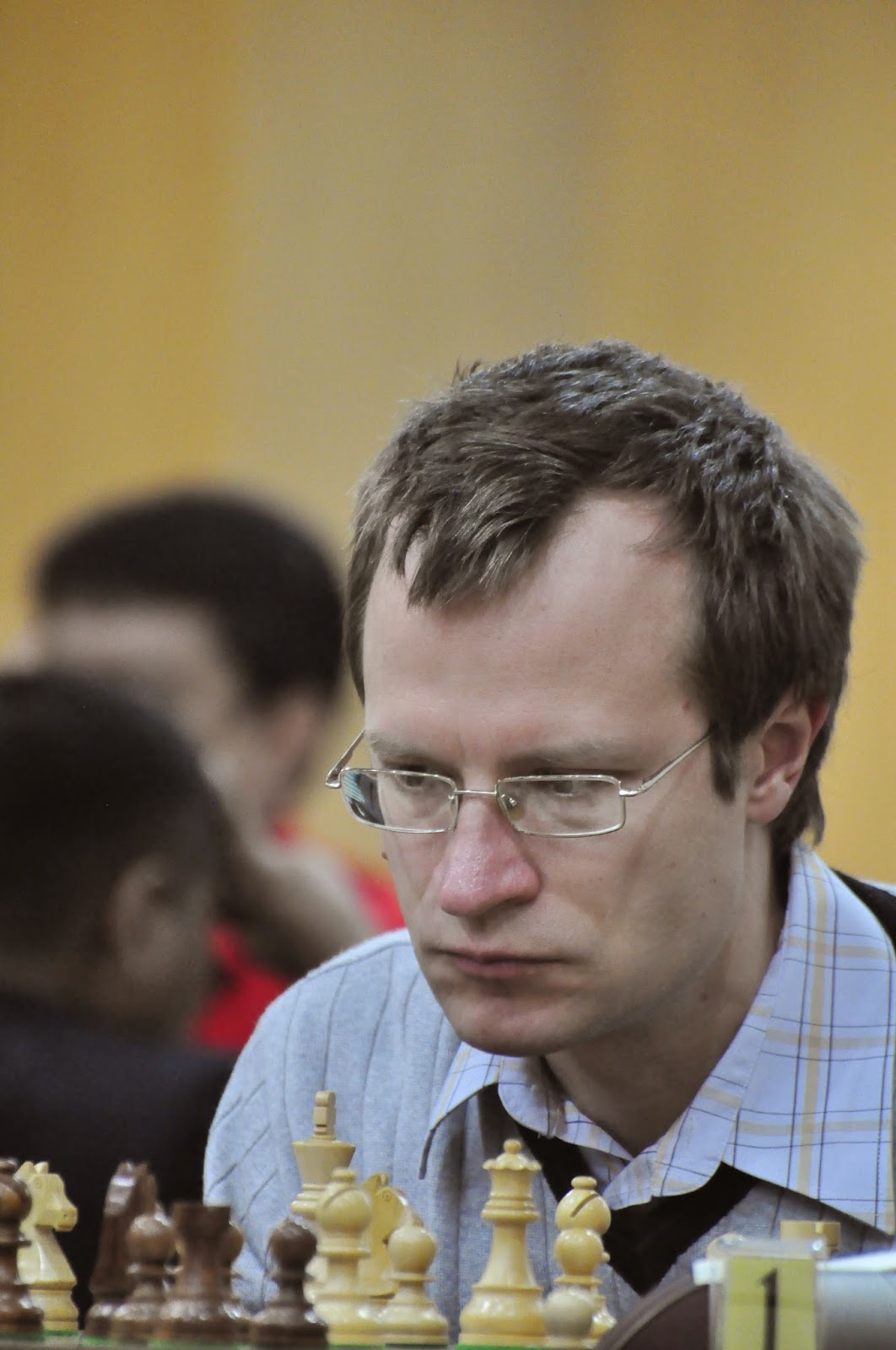 A tense top board encounter ended with top seed and defending champion Sergei Tiviakov taking a one point lead with two rounds to go. The acknowledged master of the minimal advantage once again showed this special talent with the advantage of the white pieces.

For Moulthun Ly, a win, even a draw, would have all but ensured his maiden grandmaster title norm but he made his 2600 rated opponent work very hard indeed.

With his win over Fong Yit Ho, veteran IM Jimmy Liew is now the best of the Malaysians with 4.5/7, Yit Ho joining another loser in Yeoh Li Tian and a winner in younger brother Yit San on 3.5/7.

Posted by Peter Long at 14:23 Links to this post

We Have Two Leaders, Many Challengers 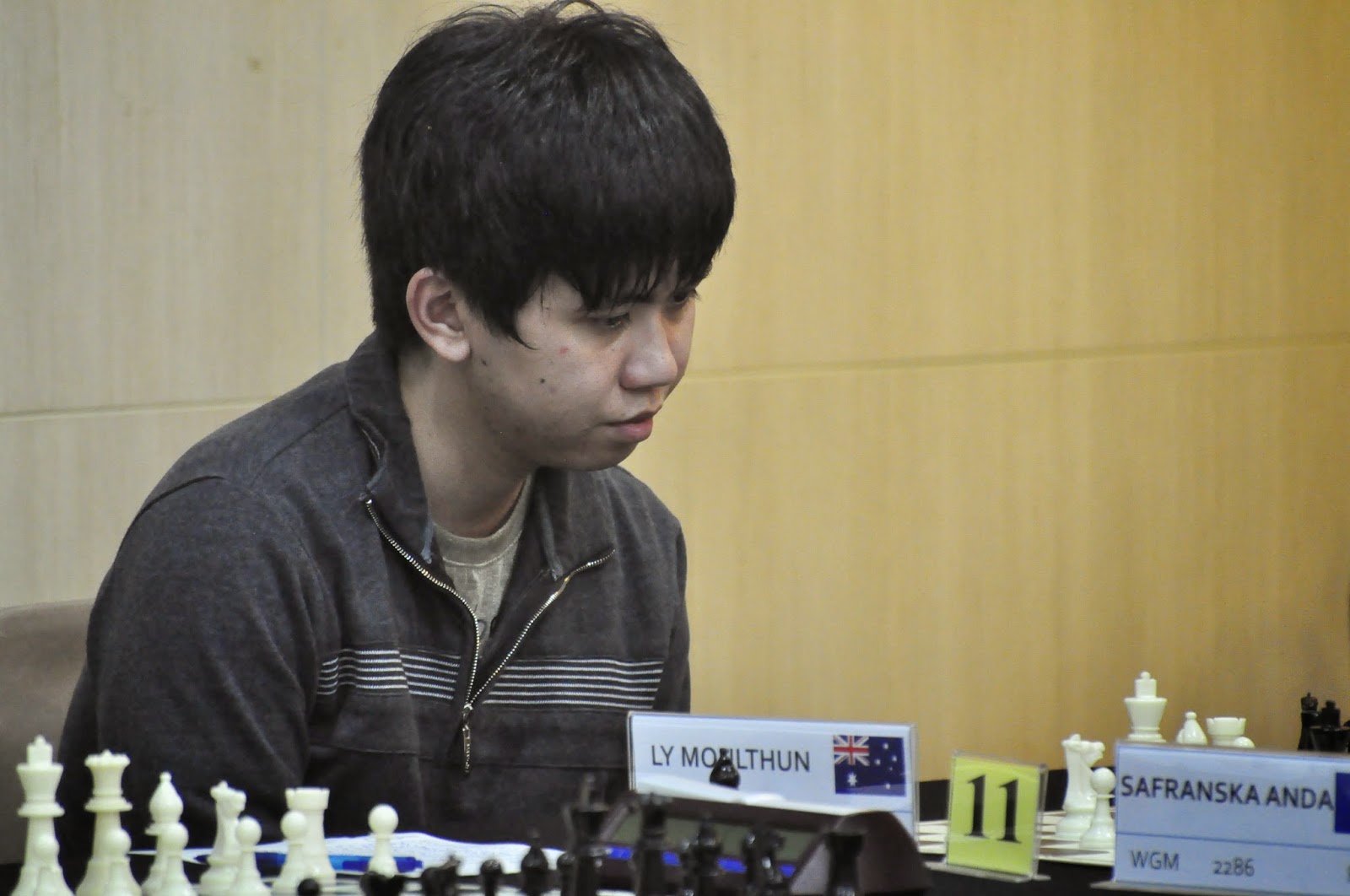 With his second successive win Mouthun Ly has joined Sergei Tiviakov on top of the leaderboard with 5/6 and is now also in contention for a GM title norm.

Ly beat fellow IM Nguyen Huynh Minh Huy while Tiviakov with the black pieces took a quick draw against John Paul Gomez. Both leaders will now meet in round seven. 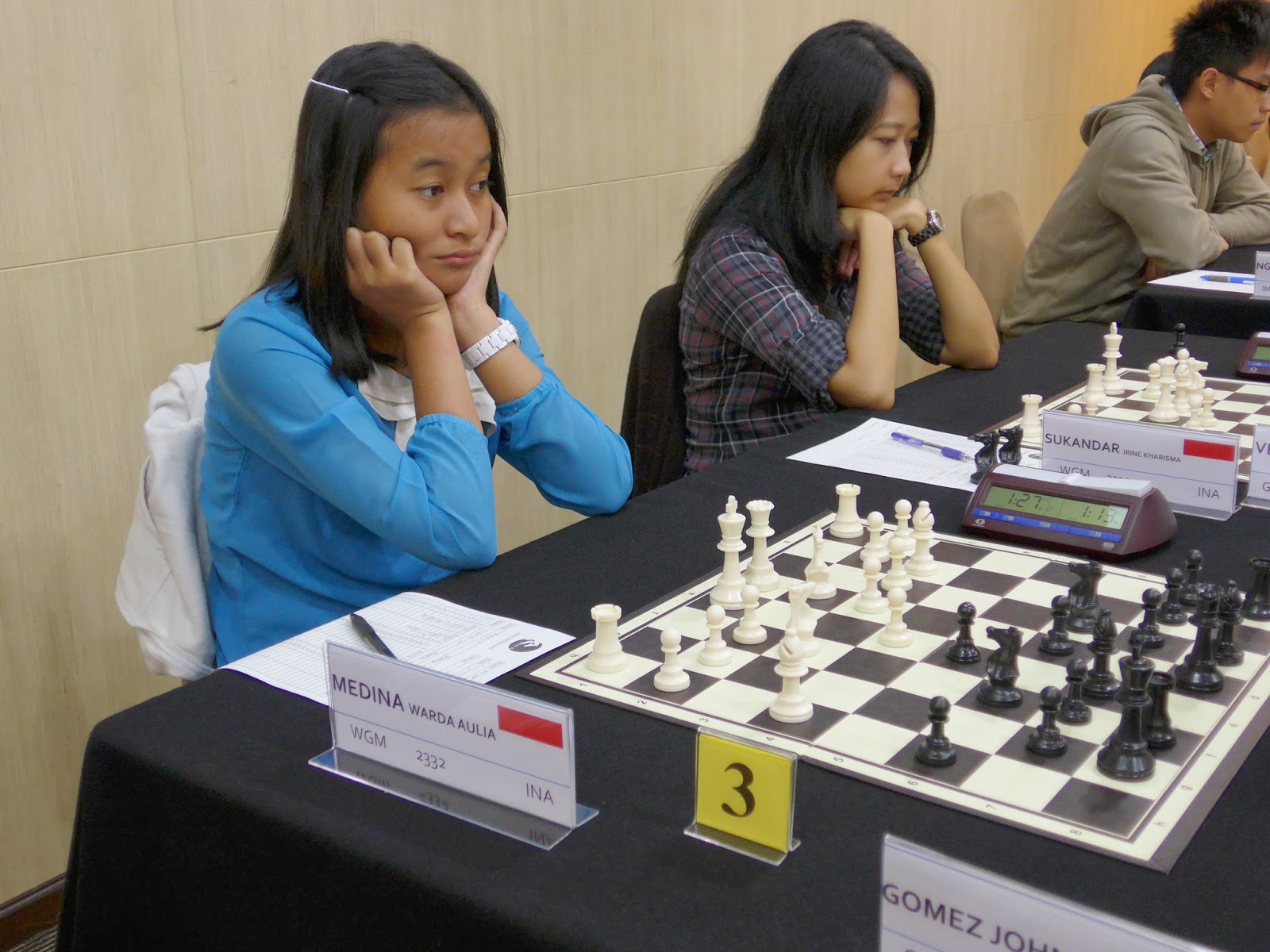 Two young players who are impressing are 17 year old WGM Medina Warda Aulia (photo above) and 15 year old FM Aravindh Chithambaram (photo below) and are showing they easily belong amongst the group on 4/6. Both are unbeaten despite playing numerous grandmasters and are in contention for the International Master title norm. 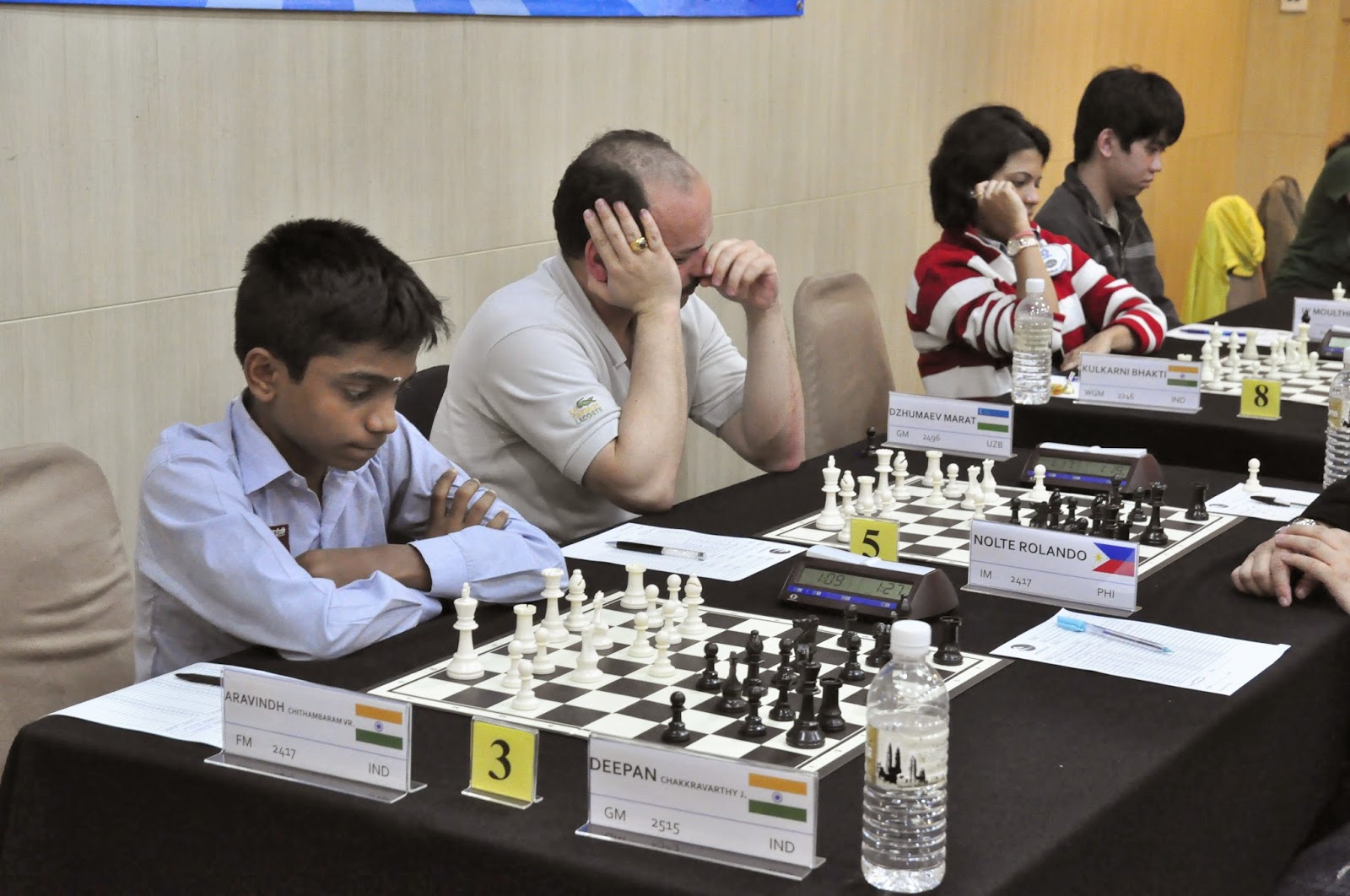 Posted by Peter Long at 14:04 Links to this post 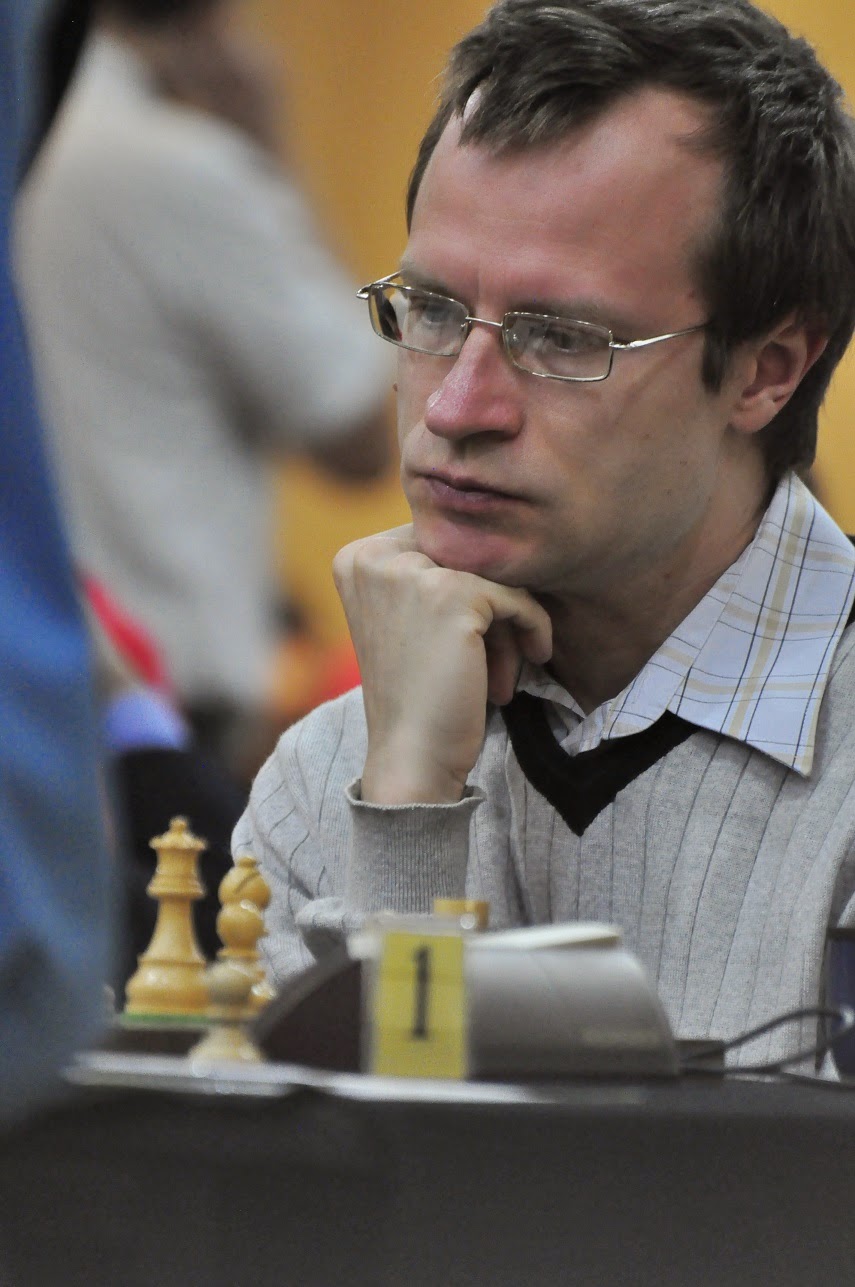 Earlier Nguyen Anh Dung and John Paul Gomez decided to preserve energy and had a quick draw to share second to eighth places on 4/5 with Moulthun Ly who managed a win over Deepan Chakkravarthy in what looked like an equal ending, Richard Bitoon and M.K. Venkatesh who had a long hard fought game, Niaz Murshed who beat Irene Sukandar and Nguyen Huynh Minh Huy who crushed Nelson Mariano III.

Posted by Peter Long at 20:22 Links to this post

Six In The Lead After Round Four 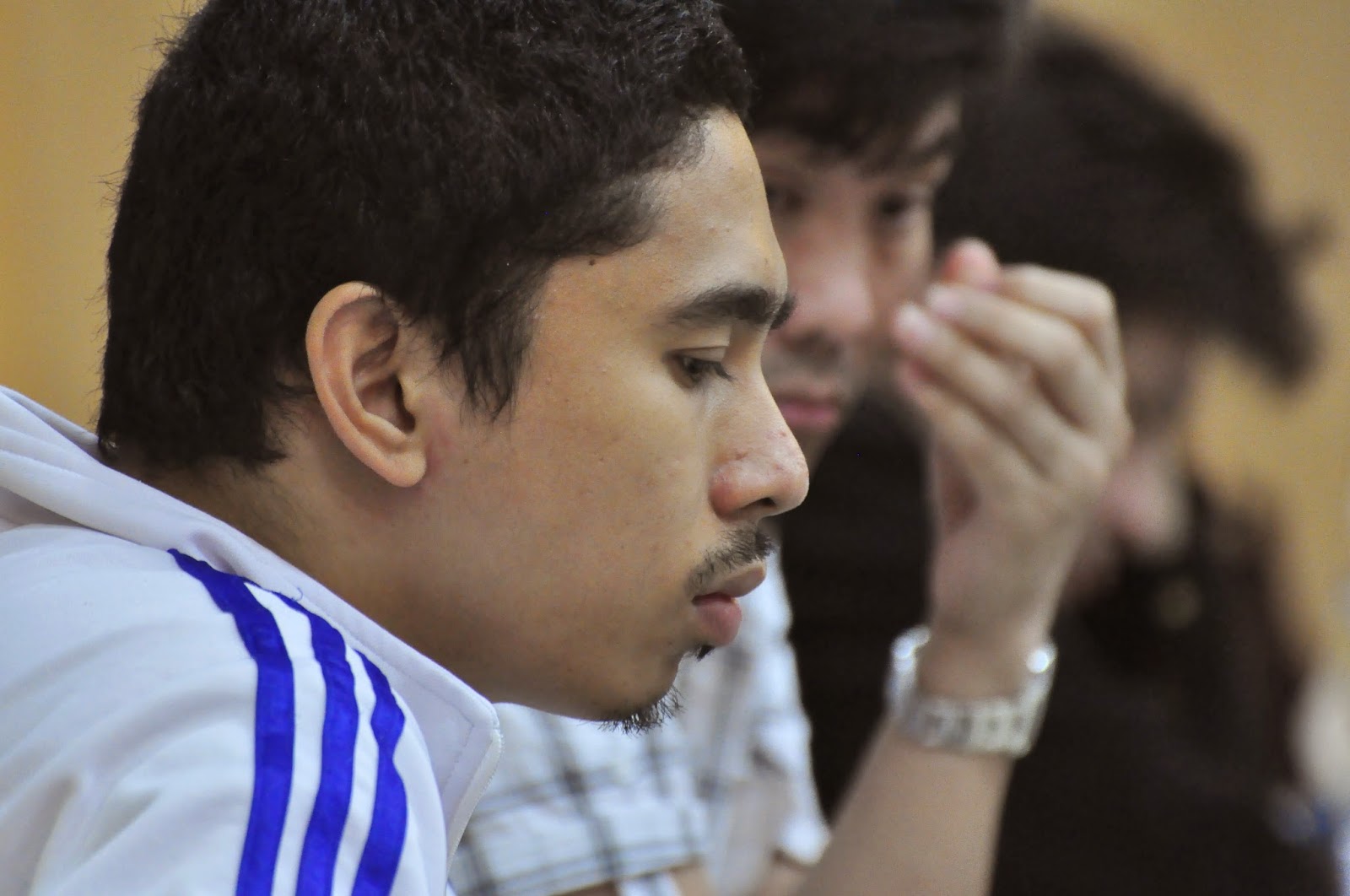 The two Filipino GMs Gomez and Bitoon had important wins in round three against strong opponents in Nguyen Van Huy and Dzhumaev Marat respectively to move into a share of the lead as the other leaders failed to make further progress.

On the home front, young and leading Malaysian prospect Yeoh Li Tian found his second GM in a row in R.R. Laxman a bit too difficult but it was the same result with veteran GM Niaz Murshed who beat the Indonesian FM Kaisar Jenius Hakki. 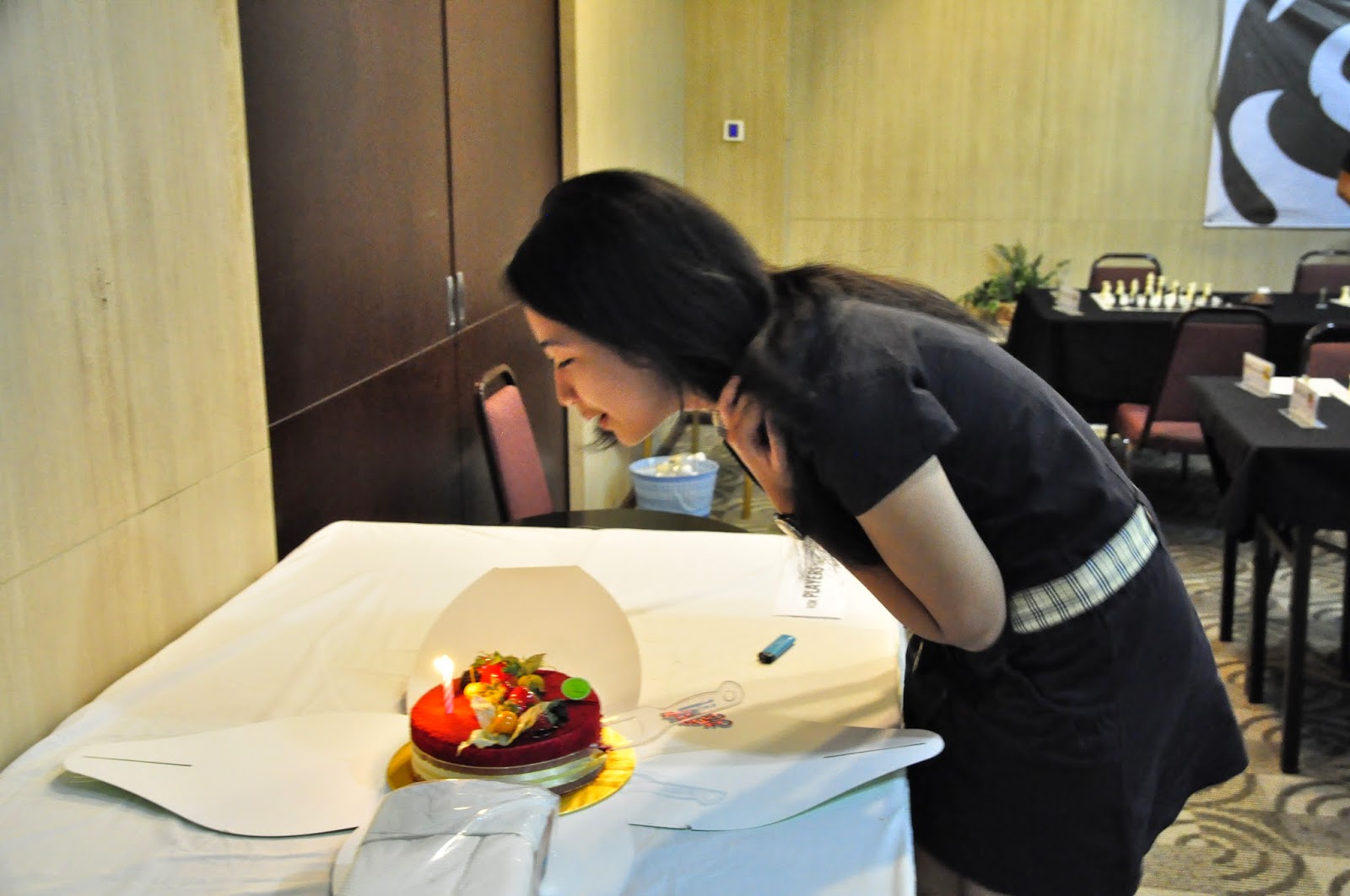 Two specially interesting match-ups was between Birthday girl and WGM Irene Sukandar and 13 year old Indian Tejaswini Sagar who is clearly with a bright future, and between FMs Pitra Andika and Nelson Mariano III, ending with Sukandar and Mariano prevailing.
Posted by Peter Long at 15:34 Links to this post

First Small Success For a Malaysian 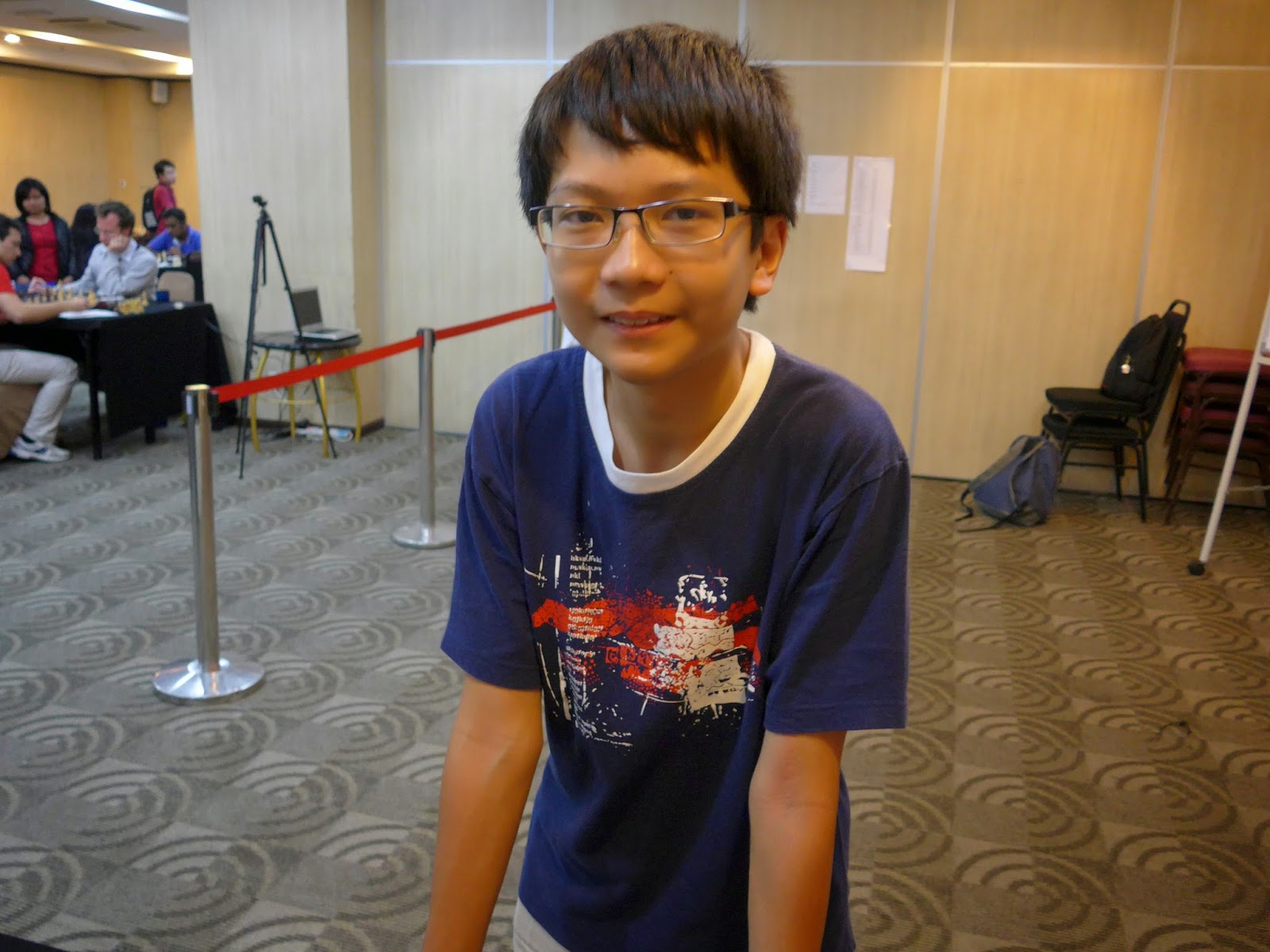 It was a good day for 15 year old Yeoh Li Tian, the third ranked Malaysian according to the April 2014 FIDE rating list, and after a first round draw when unable to break down his much lower ranked opponent's defence, the top seeded local hope had two excellent back to back results including a win against yet another grandmaster in India's Neelotpal Das.

The leaders are GMs Sergei Tiviakov, M.K. Venkatesh and Nguyen Anh Dung, all three experienced professionals on a perfect 3/3.

Sunday 6 April is a rest day before two demanding rounds, four and five, on Monday 7 April, games that could put a shape to this year's KL Open and even throw up a clear favourite or sole leader.
Posted by Peter Long at 20:12 Links to this post

Early Surprises in Round Two 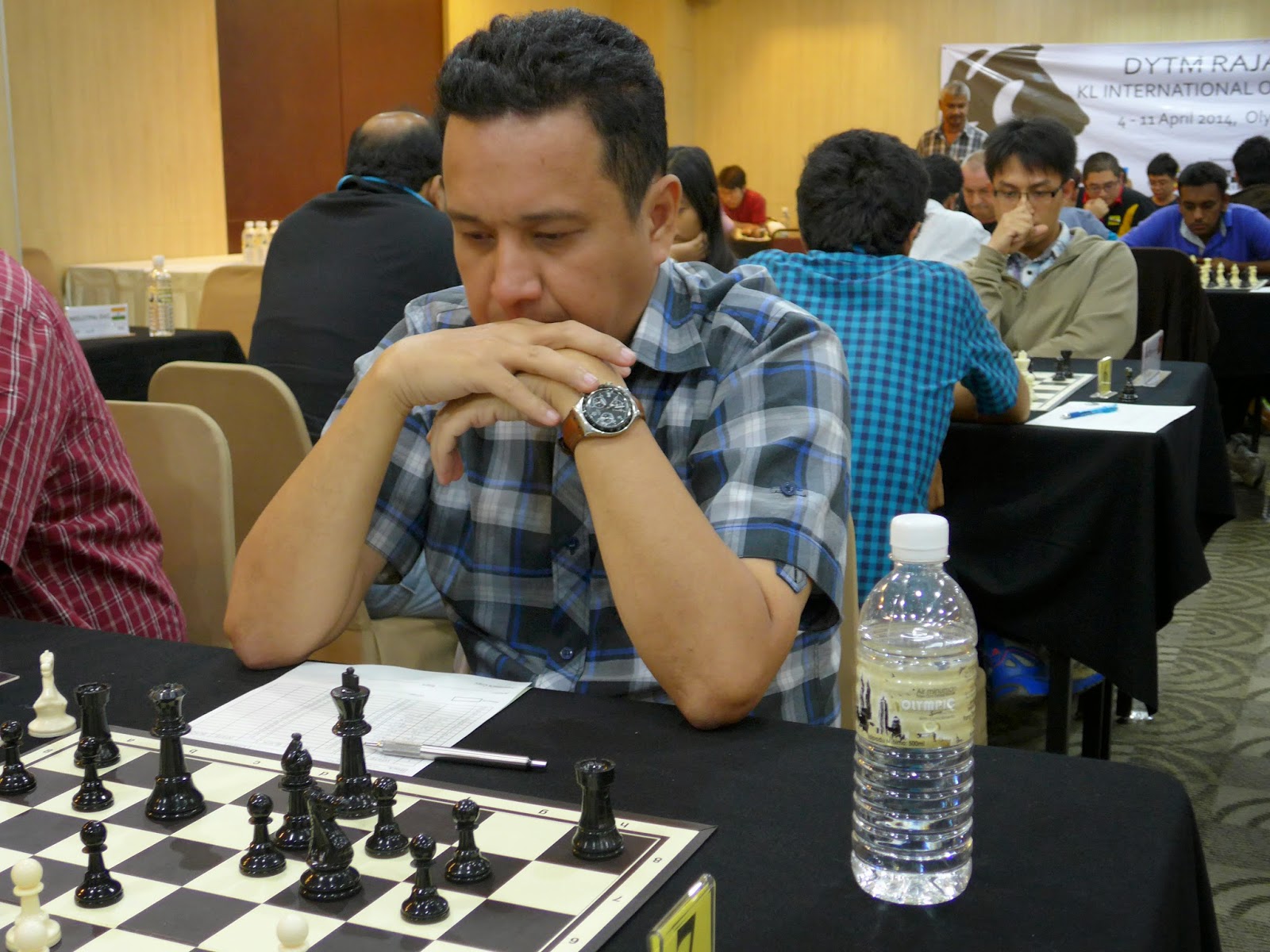 Majella came as the Assistant Manager of the Indonesian Team and decided to play so that the tournament would not have a bye but with a highly impressive victory over one of the pre-tournament favourites in IM Nguyen Duc Hoa, he has now shown he is not just here to make up the numbers! And that the Indonesian players would now have to get their own drinks! 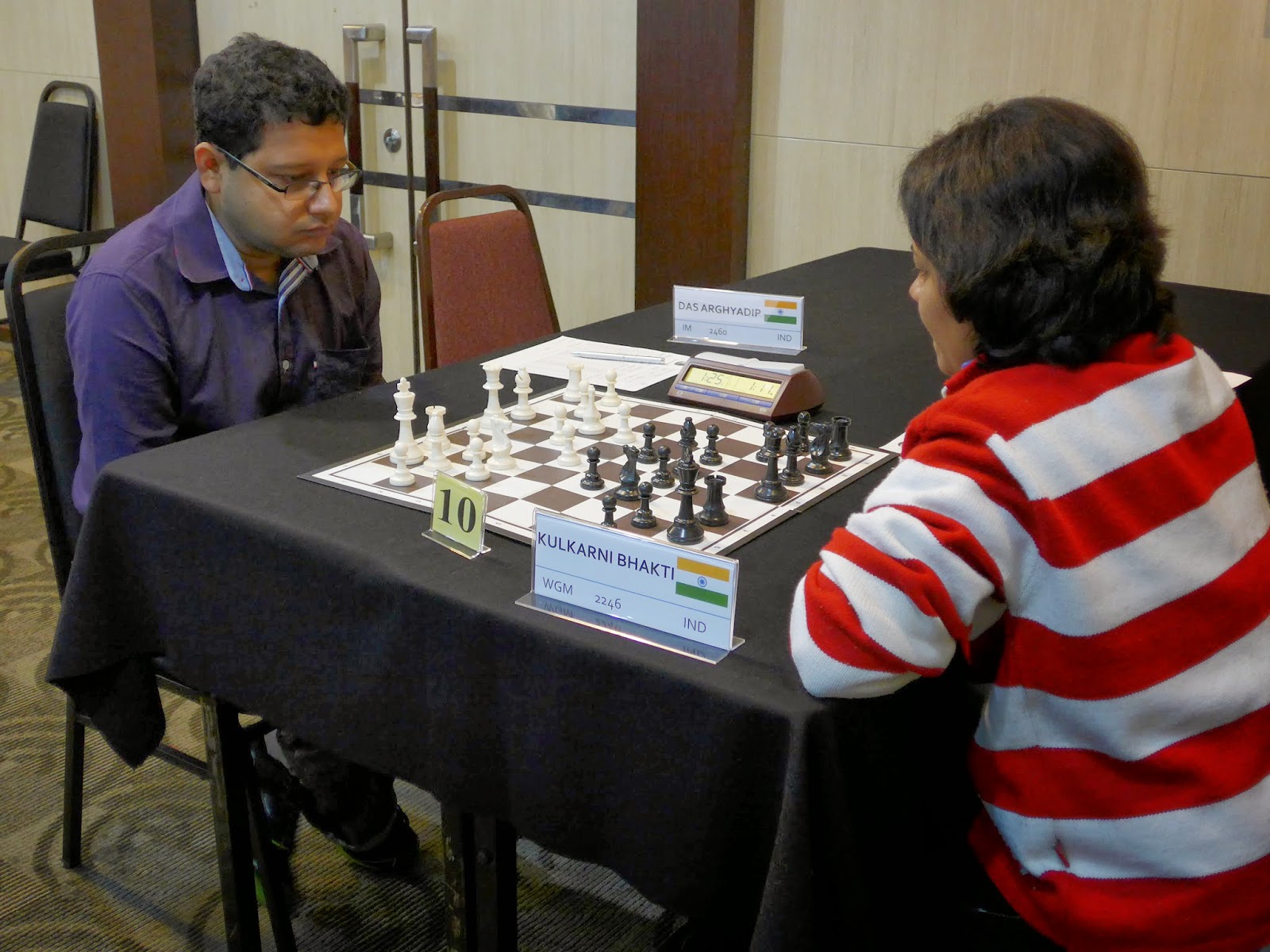 WGM Bhakti Kulkarni also showed her class with a convincing win over IM Arghyadip Das who, recently having married, is probably now quickly over his honeymoon period.

The KL Open Has Started 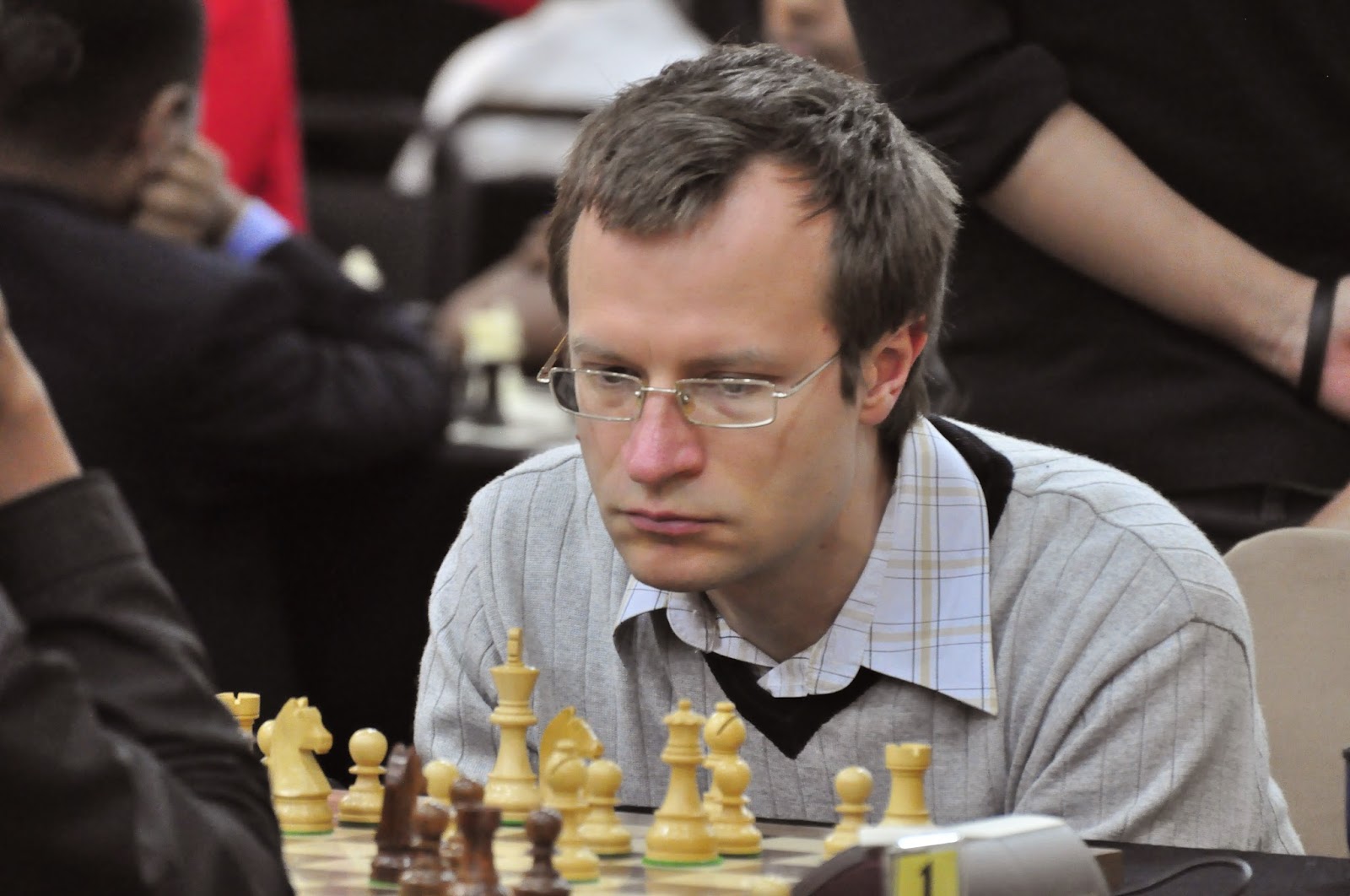 Tiviakov is the only player to repeat as champion, and is looking to defend his title by winning for the third time in a row.

With the sudden arrival of last minute entry Dzhumaev Marat, the top seed will now however be amongst 12 GMs participating from amongst 46 titled players from 19 countries including 5 WGMs, 13 IMs, 3 WIMs and 8 FMs (see http://chess-results.com/tnr129676.aspx?lan=1&art=13&turdet=YES&wi=821) with the main competition for the DYTM Raja Nazrin Shah Challenge Trophy expected to come from GMs Tiviakov, Suat Atalik, John Paul Gomez and Deepan Chakkravarty, IM Nguyen Duc Hoa and young FM Aravindh Chithambaram. 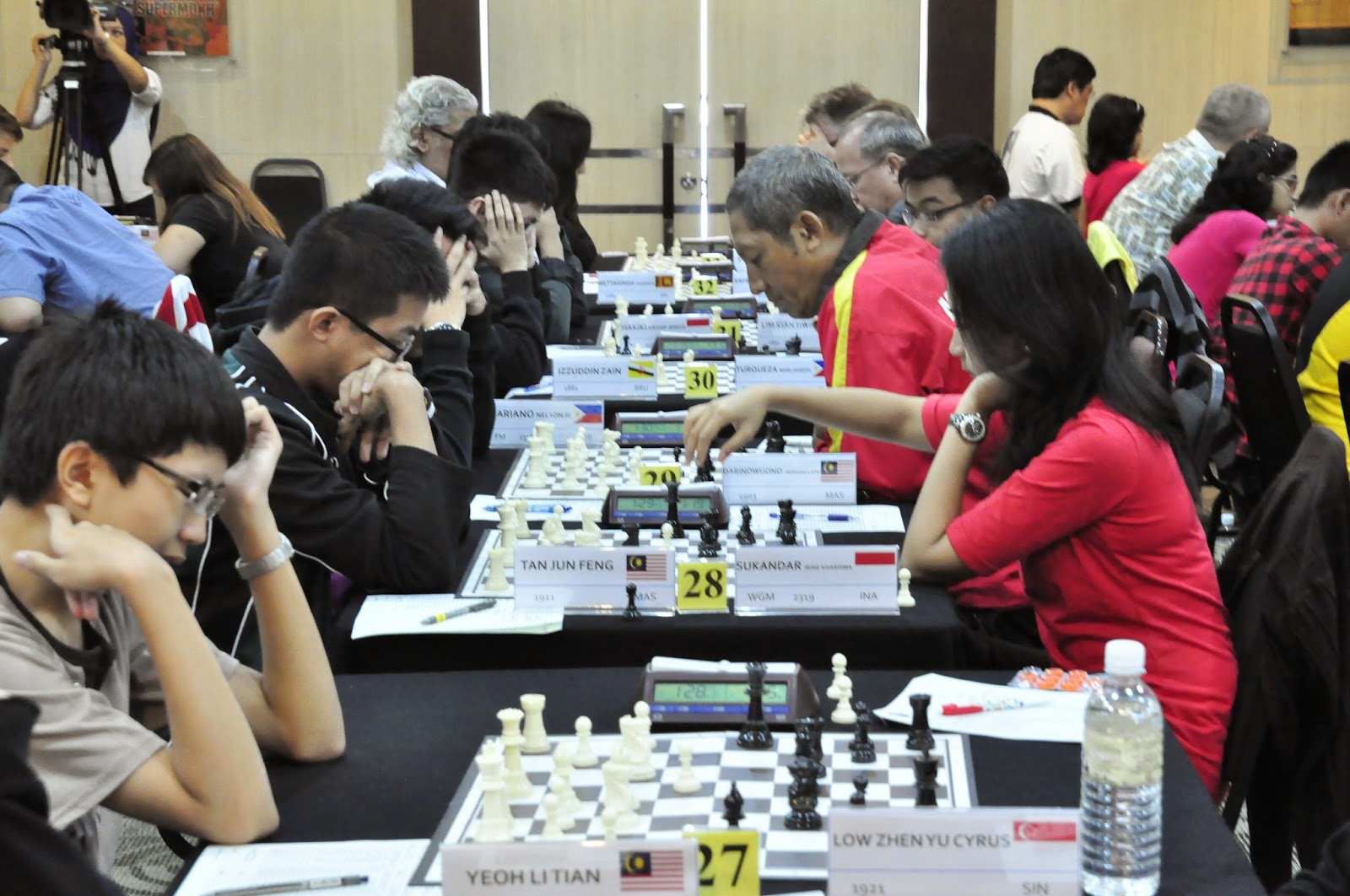 The KL Open is now its seventh year, and was again made possible through sponsorship from the Malaysian Intellect Development Foundation, and is being organised by Polgar Chess Asia, together with official media partners Chessdom and Capital TV, for the Kuala Lumpur Chess Association.
Posted by Peter Long at 17:53 Links to this post 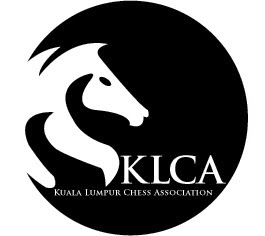 The April FIDE Rating List is out and we have updated the Final Entry List for the 11 a.m. Technical Meeting on 4 April 2014 at the Olympic Sports Hotel.

The tournament statistics are as above: 19 countries represented by 88 players, of which a surprising 17 are from Malaysia with India, Philippines and Indonesia also having very good representation.

We have 16 GMs (11 men and 5 women), 16 IMs (13 men and 3 women), and 11 FMs ( 8 men and 3 women) so a total of 43 (45 if including CMs which I have said before is to encourage young players yet to get a proper title and so really means nothing in terms of helping an event make title norm requirements), and so a touch under or above 50 percent titled players depends how you what to count.

Bottom line is the KL Open this year (as always) is providing IMs real changes for GM norms, and the WGMS and FMs very good chances for IM norms while the 2200 level players will have the chance to increase their ratings.
Posted by Peter Long at 09:49 Links to this post

The Kuala Lumpur Chess Association has agreed to a request from the Malaysian Chess Federation (MCF) to collect entries on their behalf for the coming National Age group Championships from 12-14 April 2014 during the DYTM Raja Dr Nazrin Shah Kuala Lumpur Open Chess Championships held at the Olympic Sports Hotel from 4-11 April 2014.

Please ensure that the forms are fully filled up together with payment and any necessary endorsements and we will then compile and pass it on to MCF.
Posted by Peter Long at 19:43 Links to this post