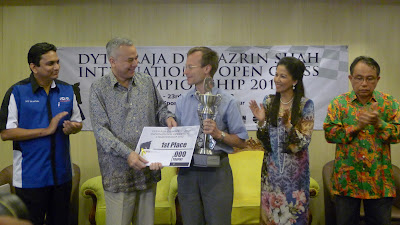 With an unbeaten 7/9, top seeded Sergei Tiviakov was a popular and deserving winner with defending champion Oliver Barbosa of the Philippines having to settle for a share of the first and second place prize money.

Leading a pack of 4 players (including 3 Vietnamese!) just half a point behind was Cao Sang followed by Nguyen Van Huy, Jahongir Vakhidov, and Nguyen Duc Hoa. 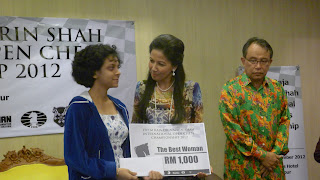 The top woman player proved to be India's Padmini Rout while 20th placed Ng Tze Han was the best finisher amongst the record 27 locals participating.

On top board: Sergei Tiviakov vs Ngo Thi Kim Tuyen 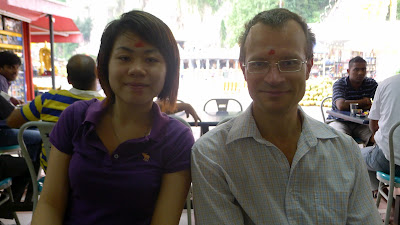 Yes, it is official - there are 82 players in the DYTM Raja Dr. Nazrin Shah International Open Championship 2012 - and the pairings for Round One is as follows http://chess-results.com/tnr81105.aspx?art=2&rd=1&lan=1 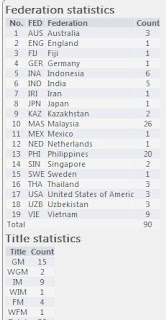 Other than some minor changes to be confirmed in the next few days, the line up for the DYTM Raja Nazrin Shah International Open 2012 is now final with some 90 participants, 10 more than planned for.

There are also 26 Malaysians playing, a new record turnout from locals!

With every day more entries are coming in and some who are still unable to confirm early will be disappointed as there are only 80 places (although we are now looking at the possibility to squeezing in a few extra without compromising the conditions at the tournament hall).

Once the September rating list is out we will update the player ratings (please see  http://chess-results.com/tnr80433.aspx?lan=1 )

The DYTM Raja Nazrin Shah 2012 is Starting to Take Shape 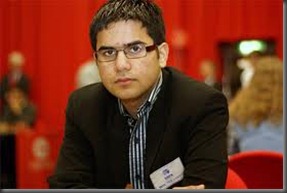 As of today 6 August 2012, some six weeks before the 17 September start of the DYTM Raja Nazrin Shah International Open Championship, we now have 56 ‘official’ entries of the targeted 80 that the playing hall will allow.

The big news is that the current Asian Continental Champion (and a former Malaysian Open Champion) who also had the distinction of being the world’s youngest grandmaster (not so very long ago!) is returning to KL, and the current Indian No 4. with a rating of 2664 at 19 years of age is certainly a big favourite despite his observation that the tournament is being played at a somewhat demanding two rounds a day!

Roses to date include Indian’s Woman Grabndmaster Kruttika Nadig whom many will remember from the Melaka Open in April and Uzbekistan’s long standing No. 1 Nafisa Muminova.

With so many of our national players amateurs and involved in Istanbul Olympiad which ends a week before, unless our No 1., International Master Mas Hafuzlhemli steps up and/or our No. 2 FIDE Master Dr. Nicholas Chan is miraculously able to get leave from work that starts the same month, the local challenge will be led by FIDE Master Dr. Ronnie Lim with other notables being veteran Lim Kian Hwa, Nor Ilhamuddin "GM at 58" Shaik Ali, and a blast from the past in the surprise participation of former top junior talent Prabhaharan Rajendran.

Of our current young talent, Penang’s Elgin Lee is so far the most prominent entered to date but many more are expected to follow once leave from school can be obtained.
Posted by Unknown at 16:15

Our Filipino Friends are Beginning to Confirm Their Participation! 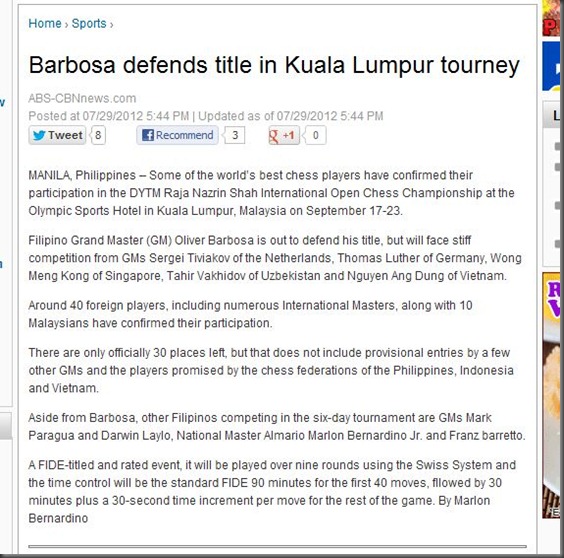 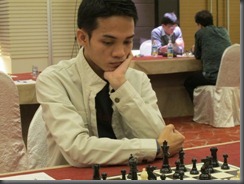 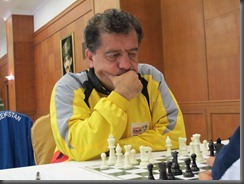 Our early Grandmaster entries were Sergei Tiviakov and Thomas Luther and now with July coming to a close and national teams to the World Chess Olympiad finalised, they are joined by some old friends of KL Chess, Oliver Barbosa, Tahir Vakhidov, Nguyen Ang Dung and Dr. Wong Meng Kong.

Together with numerous IM entries, the foreign numbers are now closing on to 40 and with a total of 10 Malaysians also having confirmed, there are officially only 30 places left but that does not include provisional entries by a few other GMs and the players promised by the national chess federations of the Philippines, Indonesia and Vietnam.
Posted by Unknown at 01:00

The tournament will played over 9 rounds using the Swiss System, and according to World Chess Federation (FIDE) Title & Rating Regulations, with a a time control of 90 minutes for 40 moves followed by 30 minutes plus a 30 second time increment per move for the rest of the game.

The International Open requires an entry fee of USD 100 (RM 150 for Malaysians) for all players and the organisers reserve the right to increase the entry fee for player who are unrated and those under 1800, and also to refuse any entry without explanation.

WHILE WE ACCEPT PROVISION REGISTRATION, DO NOTE THAT ENTRIES ARE ONLY CONFIRMED WITH RECEIPT OF PAYMENT AS PLACES ARE LIMITED.


6. Secretariat
The Organising Secretary/Tournament Director is Peter Long and all enquiries may be directed via email to him at peter@thefidetrainer.com or by calling him at +60133920920 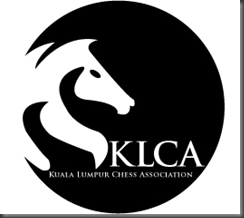 In the last few weeks I have been flooded with enquiries for the former KL Open (including the usual requests from GMs for conditions together with their corresponding offers to give simuls and/or coaching) but on the other hand have received very few local entries.

This year the space is limited to just 80 entries and with over 30 confirmed foreign entries now, a promise by the Philippines to send a large official delegation (which will add to the usual suspects we often have visiting) together with at least another 20 top players from our other long time ASEAN friend countries, there will soon be little space left for Malaysians!

So please make your move soon! 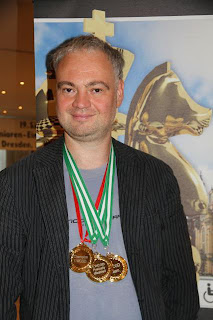 Popular (and strong) Grandmaster Thomas Luther, a three time German Champion, has now confirmed that he will be returning for this year’s DYTM Raja Nazrin Shah International Open Championship 2012.

Local chess enthusiasts will remember him from the 3rd KL Open Championship in 2010 and I remember many pleasant evenings in his company at the Khanty Mansiysk Olympiad where he opted to play for the International Physical Disabled Chess Association (IPCA).

Since then Thomas has been a very active advocate including developing training seminars and his work has been recognised by being made the Advisor of the FIDE Chess for the Disabled Commission.
Posted by Unknown at 11:05

In the fifth edition of the DYTM Raja Nazrin Shah International Open (former KL Open), we will have our first ever top 100 player with the participation of Grandmaster Sergei Tiviakov.

Now only rated 2656(!), the former Russian player lives and plays in the Netherlands whom he also represents and amongst his many achievements was becoming European Champion in 2008.

Fans of the game will remember him crushing World Champion V. Anand recently while playing on top board for their respective teams in the Bundesliga and I give it below. 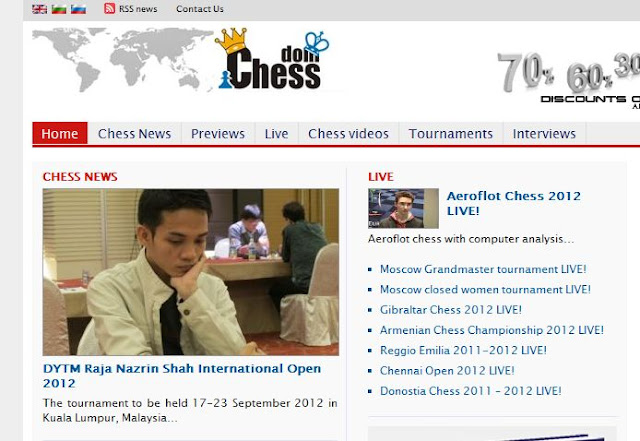 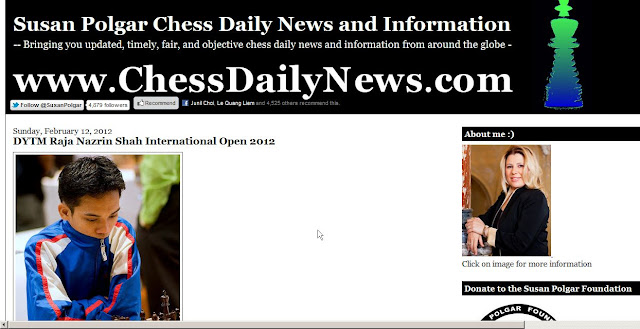