On 25th January 2016, The Kuala Lumpur Chess Association(KLCA) received an invitation via email from the Malaysian Chess Federation (MCF) to send players to compete in the event.

KL players who fulfill the criteria set by both MCF and KLCA in 2015, and able to play in the Malaysian Championships 2016 are invited to submit your name to KLCA for consideration.
Please send an email to both:-
(1) Sumant Subramaniam (Head, KLCA Selection Committee) at sumant93@gmail.com; and,
(2) Amirul HM (Honorary Secretary) at amirulKLCA@gmail.com
latest by 5.00 PM on Monday, 15th February 2016.

The Committee will deliberate after Chinese New Year and an announcement will be made here as to who would be the official representatives for KL.

Please be informed that only members of KLCA can be chosen to represent the Federal Territory of Kuala Lumpur.

On the 25th of January 2016, The Kuala Lumpur Chess Association(KLCA) received its first official communication for 2016 from the Malaysian Chess Federation (MCF) i.e. an invitation via email for KLCA to send players to compete in the event.

Please be informed that only members of KLCA can be chosen to represent the F.T.of Kuala Lumpur.

The selection criteria to represent KLCA at the NCC 2016 will be announced in due course.

Those interested to represent Kuala Lumpur kindly express your interest by sending an email to
Mr.Sumant Subramaniam (Head, Selection) at sumant93@gmail.com; and,
c.c. KLCA's Hon.Secretary at AmirulKLCA@gmail.com.

(3) KLCA disputes the official reason given by MCF.
Many reasons can be offered by KLCA. 2 of it are as follows:-
A. MCF owes KLCA money.
The amount owing to KLCA is for KLCA helping to pay MCF's FIDE arrears in 2013.
The amount owing by MCF to FIDE was in EURO currency.
Amount paid by KLCA to FIDE is more than enough to pay for at least 20 years(if not more) of the yearly Annual Fees.

B. KLCA had written many times to MCF querying the amount to be paid and how it is to be paid.
The email sent is under the title;-
"Query on PAYMENT of YEARLY FEES by KLCA to MCF "
and was copied to Most (if not All) of the MCF EXCO Members that KLCA is aware of.

To-date, MCF have NOT replied to this email nor sent any invoice for the Yearly fees to be paid.
MCF have however found the time to invoice KLCA for 'alleged' ratings arrears.

(6) 3 October 2015
As at this moment, KLCA takes the position that for the sake of all stakeholders of chess, matters should and can be resolved amicably.
However, subject to further advice from the pertinent authority(ies) and upon Checking the Prevailing Statute(s), Any Administrative and/or Legal Option(s) available to KLCA is on the table.

Please take notice that the long delayed  Malaysian Chess Federation(MCF) AGM 2015 will be held as follows:-

The MCF via its Secretary, sent an email notice re the 2015 AGM to KLCA's Honorary Secretary on Tuesday, 22nd September 2015 i.e. 2 days before Hari Raya Haji on Thursday, 24th September 2015.

Capital TV which is aired at Channel 420, Hypp TV-UNIFI is into its 2nd Year as a Media Partner for the KL International Open. Last year Broadcast Journalist(BJ) Kim and crew attended the closing ceremony and subsequent PC.

This year, Azah Sahrin is the BJ for the event. The crew was at the venue on the Opening Day.
Checkout Capital TV's footage which was aired earlier on UNIFI:- 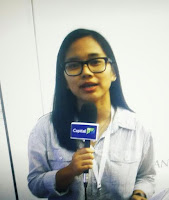 
At a time when its difficult to get any coverage for chess events in the media not only in Malaysia but elsewhere internationally and especially under the prevailing circumstances in Malaysia, the Organising Committee is thankful for the international chess media coverage. Additionally, the KLCA would like to thank members of the media corps who had in one way or another provided coverage or assisted with the KL Open 2015.
Posted by amFA at 22:16 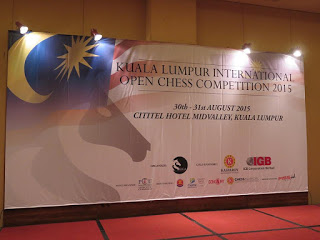